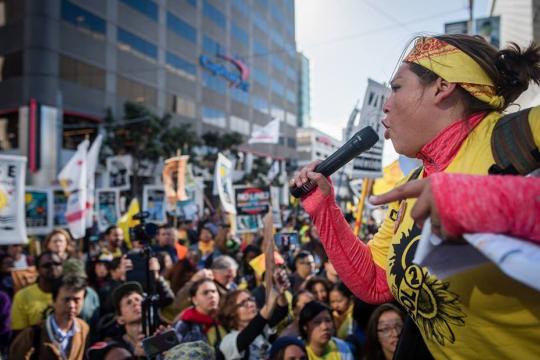 Spitfire started working with the Nathan Cummings Foundation (NCF) in 2015 when it named its first female president, Sharon Alpert. Since then, we have found creative ways for NCF to use its voice as one of the most valuable resources it has for promoting its values and vision of the world.

Four years later, the organization is well on its way to becoming the communicating organization it wants to be at a time when philanthropy is called to stand on the front lines to strengthen democracy and make progress. Over the years, Spitfire partnered with NCF to use strategic communication to advance its mission and has helped NCF increase its capacity to do this work well. After conducting an organization-wide survey among board and staff, we set communication priorities and developed messaging to explain a new strategic framework that guides the foundation’s grantmaking. We helped hire the organization’s first communications director, followed by a communications associate. The organization now operates off an annual communication plan and is guided by an editorial calendar that tracks institution-wide and focus-area happenings so NCF can make the most of them. Spitfire also helped NCF overhaul its website to be an expression of its identity as a foundation and what it cares about, using this to amplify grantee work and promote their perspectives. We set up systems to assess strategic communication opportunities from speeches to sign-on letters, and we have built a library of talking points and visuals to help NCF communicate consistently and compellingly. We also developed criteria for assessing risk related to speaking out to inform decisions.

We have positioned the foundation as a strong vocal advocate for its values. In 2018, we supported NCF’s groundbreaking announcement that it would dedicate 100 percent of its endowment to mission-aligned investing. After the announcement, we supported Sharon Alpert as she became a lead spokesperson on the importance of doing this.

Spitfire has written speeches for Sharon’s appearances at conferences held by Social Capital Markets (SOCAP), Confluence Philanthropy and the Jewish Funders Network, and developed by-lined pieces and helped generate media to capture her perspective. When hate marched in Charlottesville, Virginia, Sharon wrote a moving piece that was covered in the press: “No Home for Hate.”

NCF responded to the Tree of Life massacre with a letter to the field, promising that philanthropy can and will ensure that peace and solidarity prevail over hate. The letter was featured on the Funders Network website. Sharon also gave a speech on the need for radical solidarity at the Heinz Endowment Call to Moral Leadership: Courage to Act Conference. She followed this with a widely shared op-ed in April 2019 after the shooting in New Zealand, calling on all of us to #DeactivateHate.

Spitfire supports other NCF staff to be thought leaders on their respective issues and shape important conversations. Using NCF’s Critical Minded Initiative as a hook, Spitfire helped promote an op-ed in The New York Times, “The Dominance of the White Male Critic,” driving home the need for more critics of color. Because NCF is interested in how communication is advancing its mission, we conducted an in-depth social media landscape analysis to determine how the op-ed shaped the national discourse. Director Laura Campos, a long-time leader on the power of shareholder activism to check corporate power, wrote about the need for CEOs to safeguard – not silence – active shareholders. Inclusive Clean Economy director Danielle Deane finds opportunities, like this one in Grist, to call for a more inclusive climate movement.

Spitfire helps NCF create communication materials to uphold its commitment to transparency. NCF regularly shares how and why it makes decisions. This includes a blog interview between former NCF fellow Bridgit Antoinette Evans and incoming board chair Jaimie Mayer. Here, the first fourth-generation member of the Cummings family details her focus: “My hope is for NCF and philanthropy writ large to build a strong culture of internal accountability. We hold grantees, movement leaders, companies and organizations to such a high level of accountability, and we need to do the same for ourselves.” It also recently announced more details on its funding in Israel to build a multi-ethnic democracy.

Spitfire also amplifies the work of NCF grantees and fellows. NCF is committed to using its platforms and influence to put the work of its grantees front and center. We help with this effort by capturing insights from board of director learning days that feature grantee work, using examples of grantee work in speeches and media and tweeting and posting on social media. We create content like this blog series that showcases NCF grantees on the front lines fighting to decrease dangerous corporate power. For the most recent fellowship cycle, we created promotional plans that netted not only the largest-ever number of applications for the coveted positions, but also a diverse group of applicants that spanned NCF’s four focus areas, going from 262 applicants in 2017 to 420 in 2019.