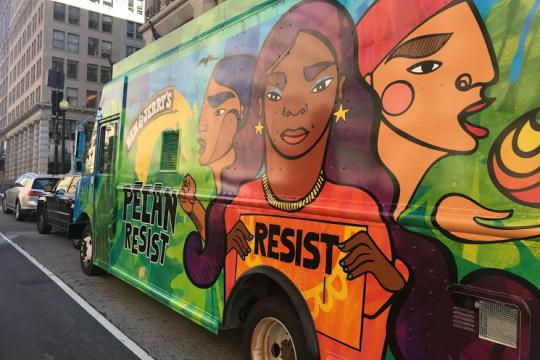 Spitfire works with Ben & Jerry’s, a company long known for its social activism, in its pursuit of systemic change to make the country a more just and safe place for all people. We began collaborating with Ben and Jerry’s in 2018, as it joined forces with the new Poor People’s Campaign to leverage its assets in advancing justice, and we continue to be thought partners and campaign advisers in the company’s work around criminal justice reform in 2019.

When it comes to critical conversations around race, justice and other pressing issues of the day, Spitfire understands that socially conscious businesses have a powerful role to play. To be successful in this effort, Spitfire’s team drew on our deep expertise in shifting attitudes, behaviors and beliefs around racism, oppression and opportunity. In 2018, Spitfire began collaborating with the social mission team at Ben & Jerry’s to shape its narrative in support of the Poor People’s campaign. To help the company define and amplify its work, we created an in-depth messaging guide, complete with compelling, tested points on social, economic and racial justice.

With these important tools in hand, Spitfire’s partnership with Ben & Jerry’s shifted gears in 2019 to support the company’s advocacy around front-end criminal justice reform. Understanding the company’s desire to bring in new audiences to the work of its partner organizations, Advancement Project and Color of Change, we developed a comprehensive platform for outreach and engagement with Ben & Jerry’s fan base. Ben & Jerry’s incorporated Spitfire’s framework into the full range of public-facing materials it regularly releases on front-end criminal justice reform work, from blogs and social media to ice cream marketing, events and partnership work.

Our partnership has also led to an ongoing role as campaign and outreach adviser, with Spitfire reviewing content to ensure it fits with the company’s overall conversation with its fan base and providing thought partnership to leverage the corporation’s role in conversations in the news from marijuana justice to voting rights to women’s rights. In the fall of 2019, Spitfire supported the launch of Ben and Jerry’s new flavor, Justice Remix’d, in partnership with Advancement Project, providing messaging about criminal justice reform for social media, blogs and press outreach.

Spitfire is proud to continue to support Ben and Jerry’s as it uses its platform to fight for social, racial and economic justice for all.