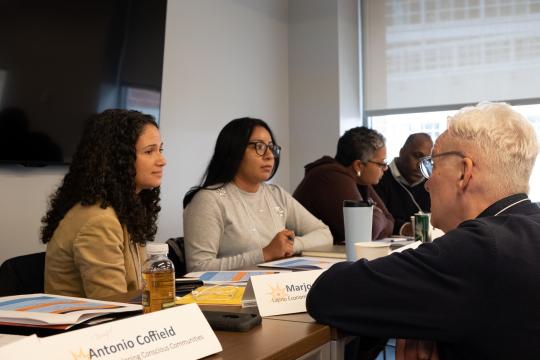 The Center on Budget and Policy Priorities (The Center) is a nonpartisan research and policy institute pursuing federal and state policies designed to reduce poverty and increase economic equity. The Center wanted to expand the earned income tax credit (EITC) to include working people who are not primary caretakers of children but still contribute to their well-being.

Spitfire helped The Center in this effort by drafting messages, testing them in online focus groups and creating a messaging toolkit to support communication about this initiative.

The EITC is a federal tax credit for parents and caregivers with guardianship of children. Adults who don’t have children or aren’t able to claim them for tax purposes are eligible for a much smaller EITC amount, and if they are between the ages of 21 and 24, they are not eligible to receive the EITC at all. Nearly 75 million working men and women are taxed into or deeper into poverty. Expanding the EITC to include them would help alleviate that.

The Center wanted to expand the credit to benefit not only caregivers with children, but all working people, who contribute to the well-being of children by contributing to their communities, even if they are not primary caretakers. The Center needed to know how to talk about that in a way that resonated with its audiences – policymakers and the constituents they listened to.

Working closely with the client, Spitfire determined that we needed to take a research-based approach to identify the most compelling messages and create a toolkit for The Center that included ready-to-use templates for earned media like op-eds, letters to the editor and social media content.

Using public opinion research from online discussion groups that included participants with both conservative and progressive views, Spitfire developed message recommendations for The Center. The research explored messages and profiles of types of workers who could benefit from an expanded EITC, testing to see what resonated most with each audience. We identified the messages that appealed to progressives and conservatives and determined which messages should be avoided for each group. These messages informed the toolkit we developed, which included template op-eds, sample letters to the editor and tailored talking points focused on young people, active duty and military veterans, African-American and Latinx workers and non-custodial parents.

We also created a messaging sheet to further guide The Center in communicating about the EITC to its specific policymaker targets. The Center continues to work to expand the EITC and support legislation that spreads its benefits to more workers.