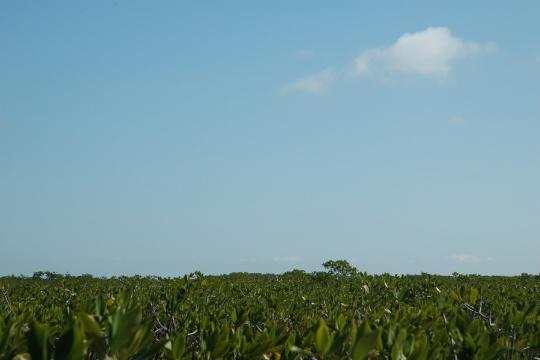 Car­bon Dioxide Removal (CDR) was a necessary but lesser-known solu­tion to the climate crisis. A set of groups, includ­ing WRI, wanted to raise the profile of CDR in cli­mate conversations in a way that would build bipartisan support and not embolden opposition to paint CDR as a “get out of jail free” card for indus­try. CDR was at a disadvantage. Not enough pol­icymakers understood the suite of CDR solutions that needed to be deployed and why we needed to ramp up investments now to be ready in time to make a difference.

Early coverage and perceptions of CDR conflated it with geoengineering, which would bring out opposition from green groups and, at times, put it in competition with renewable ener­gy rather than present it as a partner for getting the climate crisis under control.

As we dug in, we found the prevailing narratives about CDR are often confusing or unhelpful. We did the research and found out how to develop a nar­rative and messaging that would build political will for CDR. People are hungry for good news on cli­mate change, and CDR is the good-news story. We recommended that cross-sector advocates repre­senting NGOs, companies and think tanks push the narrative that to restore the natural balance of car­bon in the atmosphere and avoid negative impacts of carbon pollution, we must both reduce carbon emissions and pull existing carbon pollution out of the atmosphere. Our messaging, which is ongoing, emphasizes that government needs to join forces with the private sector to invest in technology and techniques that will be ready to go within a decade. We identified the right spokespeople to spread this message, and the groups started reinforcing this narrative around various report releases, media opportunities and policymaker events. From the time we began working to shift the narrative in spring 2018, and running through the fall, the me­dia coverage transformed dramatically. This shift reflected messaging we developed, pivot points we created to respond to opposition messaging, deskside meetings we held with reporters to help them better understand CDR, and rapid response to report releases through talking points we pro­vided to spokespeople who could address any in­accuracies. As a result, the coverage has become much more favorable to CDR and often carries our narrative, policymakers across the aisle are stand­ing up for it publicly, and champions are using the messaging.