The new Spitfire Director started reporting professionally when she was 16 years old. While attending journalism camp in high school, one of her instructors saw promise in Kamara and convinced the editor of the local newspaper to give her a chance as a reporter for the summer. On her first day, the editor sat her down and told her, “I expect you to do real work.”

And real work she did. At the end of the summer, Kamara had written several front-page and feature stories for the newspaper, and she and the editor had become friends.

“I think his sternness on my first day was part ‘old newspaper guy’ and part ‘I can’t believe I’m giving this kid a chance to write,’” Kamara says.

By the time Kamara got to college, she already had several years of reporting experience under her belt. She attended the University of Missouri and got her bachelor’s degree in journalism. Upon graduation, following the advice of her history professor and close friend Dr. Carol Anderson, she decided to pursue her Master of Arts in African American studies from The Ohio State University.

“I loved the audience that journalism gave me, but it didn’t give me the depth,” Kamara says. She wanted to do more “to tell African-American stories and stories about racism and discrimination.” 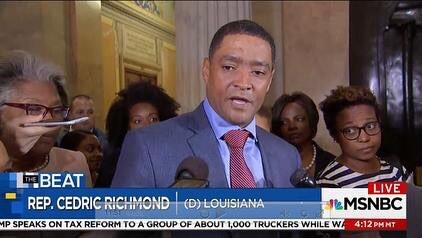 Pictured above: Kamara staffs her former boss — then-Congressional Black Caucus (CBC) Chair Cedric L. Richmond — during an October 2017 press conference about the CBC’s meeting with Facebook. The CBC met with Facebook COO Sheryl Sandberg about Russia using the platform to influence the 2016 election.

It was a fellowship with the Congressional Black Caucus (CBC) – where she would eventually return as the communications director during the 115th Congress – that inspired her to become a communications professional.

After researching the intersection of race, media and politics in graduate school, Kamara was looking for an opportunity to bring together her experience and background, and Capitol Hill turned out to be the perfect place.

After getting her start in Senator Richard Blumenthal’s office, she worked for the U.S. General Services Administration and the U.S. Department of Health and Human Services under the Obama administration before returning to the CBC.

As the communications director at the CBC, Kamara had newfound creative freedom in her job. She was able to tweet using African American Vernacular English and use messaging that resonated with the Black community. After years of working across a range of issues, from gun violence prevention to greening federal buildings to public health, she was finally able to focus her work on racial justice, her first love.

Her voice shines through on social media, where Kamara emphasizes maintaining authenticity, staying on brand, taking risks and having fun.

Kamara followed this philosophy while at the CBC. Her refreshingly clear and engaging voice stands out in tweets like this one, which features a rap song about the CBC in honor of the birth of hip-hop, and this one, which utilizes humor while calling out the president for not responding to the CBC.

Kamara’s favorite example of a strong social media presence? The NAACP’s Instagram account. She views this account as a testament to the value of consistent branding, strong graphic design and creative content that surprises and delights your audience.

When the 115th Congress came to an end, so did Kamara’s role at the CBC. She chose not to reapply; instead, she followed her desire to learn more about communications beyond the Hill. Kamara turned her focus to finding a role that would allow her to work cross-functionally in the government, nonprofit and private sectors. At Spitfire, she’s able to do this.

“It was clear to me that in order to stretch myself professionally I needed to be around other communicators who were allowed to experiment, constantly refreshing their skills and getting better at the craft,” Kamara says of her decision to join Spitfire.

And besides, she says, “If there’s a word that describes me, it’s ‘Spitfire.’”

This entry was posted on Wednesday, June 19, 2019 at 08:00 am and is filed under Spitfire culture. You can follow any responses to this entry through the RSS 2.0 feed. Both comments and pings are currently closed.