Last week, I was thrilled to hear from Caty Borum Chattoo, an award-winning communication strategist, producer, author, professor and director of the Center for Media & Social Impact. Caty stopped by Spitfire’s D.C. office to share her fascinating work to bring comedy into the world of public interest communications.

Here are five big takeaways from her talk on June 18.

1. The gatekeepers have changed.

Comedy allows for new voices to break into the world of social change. With the explosion of comedians and audiences who have grown up in the digital age, women, people of color and other underrepresented groups can share their voices more easily than before. To use Caty’s words, the “gatekeepers have changed.”

From women’s rights in India to the legacy of apartheid in South Africa, traditionally taboo topics are also more accessible through a comedic lens. YouTube, Facebook and other social media platforms have helped reduce barriers to participation and access, making comedy and comedic storytelling more diverse in its messengers and audiences than ever before. For example, comedians Hasan Minhaj and Issa Rae broke into the comedy scene through YouTube.

2. Be funny and deviant – not dark and pessimistic.

Nowadays, watching the news or scrolling through Twitter can be emotionally draining. With every day bringing news of a natural disaster, conflict abroad or another school shooting, many people are understandably feeling a sense of hopelessness or even apathy towards the world around them.

By bringing comedic elements into your messaging, you can keep your audience engaged in conversations about important social issues without the risk of overwhelming or exhausting them. Offering optimism about problems that seem unsolvable, comedy resonates with audiences and creates a gateway to increased understanding of complex issues.

One example Caty shared was Everytown for Gun Safety’s shift towards comedy to mobilize people into action. State or federal level legislative change demands constant energy and momentum, and gun control is a heavy topic that can elicit feelings of helplessness. To combat this feeling, Everytown teamed up with comedian Rachel Dratch to create a video series called “Gun Sense on the Line.” The series encouraged people to vote for candidates who support commonsense gun laws in the 2018 midterm elections.

3. Comedy should be “punching up,” not “punching down.”

Humor doesn’t always have to be at the expense of someone else—in fact, positive humor is key to effective communication. At Spitfire, we often talk about the importance of not repeating the barrier. Satire can help avoid this pitfall by keeping your messaging positive.

As Caty explained, making jokes about climate deniers isn’t an effective strategy. The science is on the side of climate change activists, so the messaging should focus on mobilizing supporters and affecting policy change. For example, late-night TV hosts, such as Trevor Noah and Steven Colbert, often tackle climate change by directing their jokes toward policymakers, rather than making fun of their audience.

4. Comedy can mobilize existing supporters – and inspire new ones.

Comedic messaging isn’t an immediate fix for difficult problems, but it is a crucial step in shifting the culture around an issue and planting the seeds for long-term change. As Caty explained, “public policy follows public opinion three-quarters of the time,” and comedy can help create that cultural shift.

Caty compared audience responses to a CNN segment about Syrian refugees to a comical Samantha Bee segment on the same topic. While audiences learned more from the CNN segment, they were more likely to act after watching the humorous one. For complex issues like the refugee crisis, comedy can mobilize more informed audiences, while encouraging new audiences to enter the conversation.

5. Leave it to the professionals.

Caty’s talk left me convinced that comedy is a valuable tool that should be incorporated into more communication strategies. However, as Caty warned, this doesn’t mean that the funniest person in the office should start planning their own stand-up routines. Communicators must strike a delicate balance between comedy and informative facts, be intentional about reaching their target audiences and select appropriate messengers.

We’ve all been in a situation where a joke doesn’t land or is even downright offensive. “Professional funny people,” as Caty likes to say, can help ensure comedic strategies are employed tastefully and effectively. 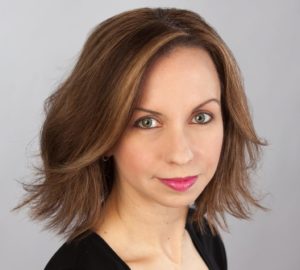 All of us here at Spitfire are grateful to Caty for showing us how to use comedy for social impact. To learn more about Caty’s work, you can listen to her talk from frank 2019 on comedy and social change and check out her upcoming book, A Comedian and An Activist Into a Bar: The (Serious) Role of Comedy in Social Justice.

This entry was posted on Friday, June 21, 2019 at 08:00 am and is filed under Communication planning, Ethical and visual storytelling and Frame, narrative and message development. You can follow any responses to this entry through the RSS 2.0 feed. Both comments and pings are currently closed.